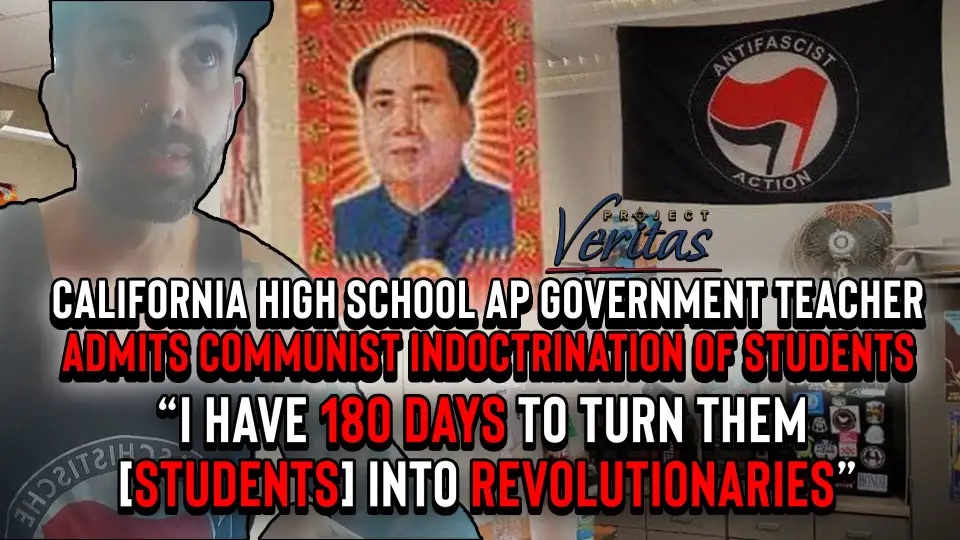 Gipe said that his intention is to radicalize students into supporting Marxist ideas by using the public school system as an avenue to incentivize them to participate in fringe extracurricular events.

“I have 180 days to turn them [students] into revolutionaries…Scare the f*ck out of them,” Gipe said.

“I post a calendar every week…I’ve had students show up for protests, community events, tabling, food distribution, all sorts of things…When they go, they take pictures, write up a reflection — that’s their extra credit,” he said.

Gipe said he keeps track of his students’ political inclinations. He is also perplexed when a student expresses discomfort with the decorations in his public-school classroom.

The public-school teacher went on to suggest that a viable solution for society’s problems is a violent overthrow of the U.S. Government.

“Like, why aren’t people just taking up arms? Like why can’t we, you know — take up arms against the state? We have historical examples of that happening, and them getting crushed and being martyrs for a cause and it’s like — okay well, it’s slow going because it takes a massive amount of organization,” Gipe said.

When asked about his views on the Chinese Communist Party, Gipe explained how lessons from China’s disastrous Cultural Revolution could be applied in the United States.

“You need a two-pronged system, which is exactly what Huey Newton and Fred Hampton [Black Panther Party] understood. You need propaganda of the deed — your economics — and cultural propaganda as well. You need to retrain the way people think. So, the Cultural Revolution in the 60s was fixing the problem that came about after the economic one,” he said.

“What can we do now to root out this culture that keeps perpetuating hyper-individualism, hyper-competitiveness, capitalist exploitation and consolidation of wealth…I do think that it’s important to understand that as an extension of an economic revolution, they [Chinese Communist Party] were changing the base, and then they went to change the superstructure. You cannot change one without the other. You can’t have cultural shifts without the economic shift, and vice versa,” he said.

“I think that for [left-wing] movements in the United States, we need to be able to attack both [cultural and economic] fronts. Right? We need to create parallel structures of power because we cannot rely on the state…Consistently focusing on education and a change of cultural propaganda. We have to hit both fronts. We have to convince people that this is what we actually need.”

Gipe admitted that he is not the only one in Inderkum High School’s faculty to hold these fringe beliefs.

“There are three other teachers in my department that I did my credential program with — and they’re rad. They’re great people. They’re definitely on the same page.”

Project Veritas encourages students and parents to contact VeritasTips@protonmail.com if they have evidence of political indoctrination and propaganda taking place in a classroom setting.

James O’Keefe established Project Veritas in 2010 as a non-profit journalism enterprise to continue his undercover reporting work. Today, Project Veritas investigates and exposes corruption, dishonesty, self-dealing, waste, fraud, and other misconduct in both public and private institutions to achieve a more ethical and transparent society and to engage in litigation to: protect, defend and expand human and civil rights secured by law, specifically First Amendment rights including promoting the free exchange of ideas in a digital world; combat and defeat censorship of any ideology; promote truthful reporting; and defend freedom of speech and association issues including the right to anonymity. O’Keefe serves as the CEO and Chairman of the Board so that he can continue to lead and teach his fellow journalists, as well as protect and nurture the Project Veritas culture.

Project Veritas is a registered 501(c)3 organization. Project Veritas does not advocate specific resolutions to the issues raised through its investigations.

Below is the information on the teacher involved, school and principal staff with their associated emails and mobile phone numbers.

About Micah – Micah Grant for Natomas School Board

BREAKING: California Teacher to be FIRED as a result of Veritas video

Winston Marshall Leaves Mumford & Sons After Being Labeled A Conservative

From Tehran to the International Scene-Shahin Zartosht, a Model’s Journey

achristi4 March 10, 2021
http://humanesmarts.org/donate/ Hop Into Spring With Our Beauty Tips, Products and Trends For Spring 2021 Issue