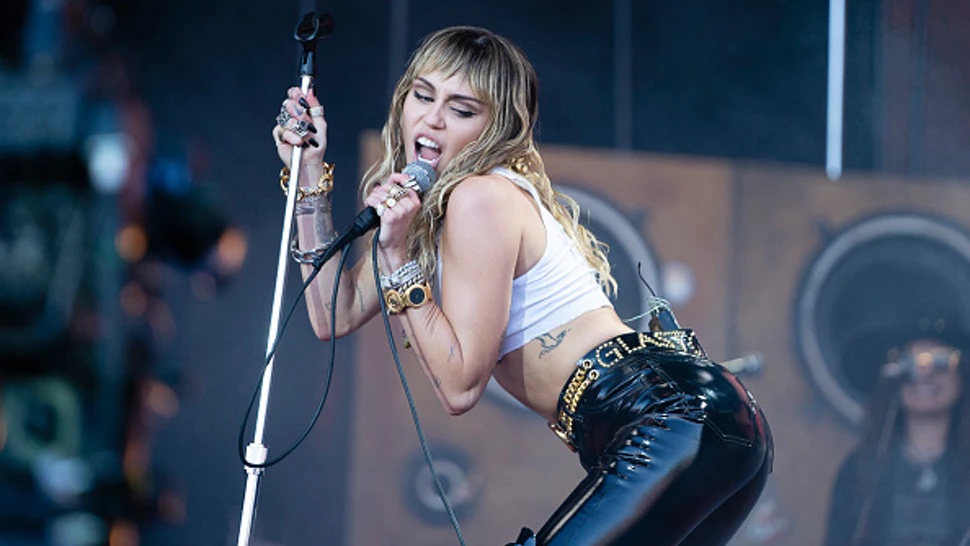 On Tuesday, pop star Miley Cyrus, 28, who has 138 million followers on Instagram and another 46 million on Twitter, many of them young, issued posts on Twitter and Instagram asking her followers to ask “Daddy” to buy them her T-shirt emblazoned “i [heart] D***,” accompanied by drawings of penises, a tongue, and droplets of semen along with the message, “MILEY CYRUS MADE ME REALIZE I AM GAY!”

IDK what @billyraycyrus is gonna be more pissed about! Me making a shirt that says “I ❤️ Dick” or crawling all over his truck in my @gucci heels! Speaking of Daddy’s ask yours for 35 bucks and get the new “Miley made me gay” merch on https://t.co/Lc580JyCEe! pic.twitter.com/9fOxcaYHVu

In the photo, Cyrus posed atop a truck, captioning the photo, “IDK what @billyraycyrus is gonna be more pissed about! Me making a shirt that says ‘I [heart] D***’ or crawling all over his truck in my @gucci heels! Speaking of Daddy’s ask yours for 35 bucks and get the new ‘a Miley made me gay’ merch on Shop.MileyCyrus.com!”

Cyrus has made her way into headlines repeatedly over claims of sexism. In September 2020, Cyrus complained that the directors of the MTV VMAs made sexist comments toward her. Cyrus told podcast host Joe Rogan that when her bracelet became entangled in something backstage before she was supposed to be swinging on a disco ball, directors stated, “You know, you want to be treated like a guy and look like a guy, we wouldn’t be dealing with this if a guy was doing it.”

Cyrus told Fox News, “I was just asking some questions — not even on some diva s***. … I wanted the lights to be turned off, and then the lighting of the room to just be lighting me. So no key light, no beauty light. The beauty light is always used on women and I said, ‘Turn the f***ing lights off.’ You would never tell Travis Scott or Adam Levine that he couldn’t turn the beauty light off.”

In October 2019, Cyrus complained about being “slut-shamed,” as E! News reported, saying:

Men (especially successful ones) are RARELY slut shamed. They move on from one beautiful woman to the next MOST times without consequences. They are usually referenced as “legends,” “heart throbs,” “G,” “Ladies Man” etc… where women are called sluts/w****s! … I am trying to just THRIVE/survive in a “mans” world… if we can’t beat em, join em! If our president can “grab em by the p***y…” can’t I just have a kiss and açai bowl?!?! … I know the public feel invested in my past relationship because they felt like they saw it [through] from the beginning. I think that’s why people have always felt so entitled over my life and how I live it because they’ve watched me grow up… but I am grown now and make choices as an adult knowing the truth/details/reality.

Meeting/trusting people in my position is really tuff. Don’t f***ing pity me, not what I’m asking for. I have a great life I wouldn’t trade “privacy” but PLEASE don’t make light and like always MAKE FUN of myself/and the public’s perception of me! Get used to me dating—this is where I am at! I refuse to recluse and “date” from home cause A. That’s not fun B. Extremely uncomfortable/ puts me in a vulnerable position… I would like to share an activity with someone I am dating and not be stuck at home with pretty much nothing to do but “Netflix and chill.”