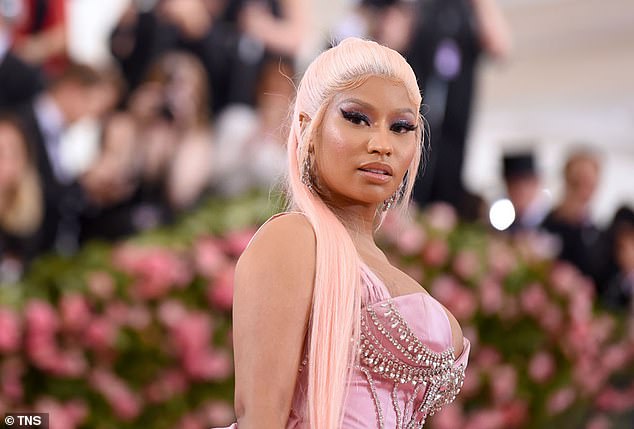 Rapper Nicki Minaj says she was ‘invited’ to the White House after she posted a flurry of misinformation tweets earlier this week about vaccine side effects.

‘The White House has invited me & I think it’s a step in the right direction,’ Minaj, 38, tweeted Wednesday following an immense amount of controversy on social media.

‘Yes, I’m going. I’ll be dressed in all pink like Legally Blonde so they know I mean business. I’ll ask questions on behalf of the ppl who have been made fun of for simply being human. #BallGate day 3’

However, a White House official told PEOPLE that the administration reached out to Minaj to offer public health education over the phone rather than an in-person visit. 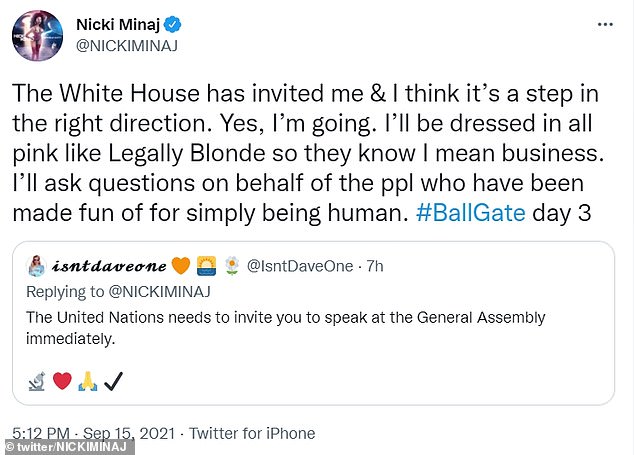 ‘As we have with others, we offered a call with Nicki Minaj and one of our doctors to answer questions she has about the safety and effectiveness of the vaccine,’ the official says.

The phone call invitation comes a few hours after Minaj was supposedly placed in ‘Twitter jail’ after violating the tech giant’s rules on sharing misinformation about the COVID-19 vaccine.

‘I’m in Twitter jail y’all. They didn’t like what I was saying over there on that block,’ the Superbass rapper shared an Instagram story on Wednesday.

As of 10pm Wednesday, the rapper’s account appears to be active, but she has not tweeted for more than three hours.

Minaj’s flurry of tweets about vaccines began with a post regarding the Met Gala in New York on Monday, which she did not attend due to a requirement which stated all attendees must be vaccinated.

‘They want you to get vaccinated for the Met. if I get vaccinated it won’t for the Met. It’ll be once I feel I’ve done enough research. I’m working on that now. In the meantime my loves, be safe. Wear the mask with 2 strings that grips your head & face. Not that loose one,’ wrote Minaj.

While Minaj would have been banned from attending the Met because she is unvaccinated, she said she was also forced to skip it as she had tested positive for COVID-19 while prepping for the MTV VMAs.

Minaj went on to tweet to her 22 million followers that the vaccine had left a cousin’s friend in Trinidad ‘impotent’ and with ‘swollen’ testicles, causing his fiancée to cancel their wedding.

‘My cousin in Trinidad won’t get the vaccine cuz his friend got it & became impotent. His testicles became swollen. His friend was weeks away from getting married, now the girl called off the wedding. So just pray on it & make sure you’re comfortable with ur decision, not bullied,’ the rapper followed up. 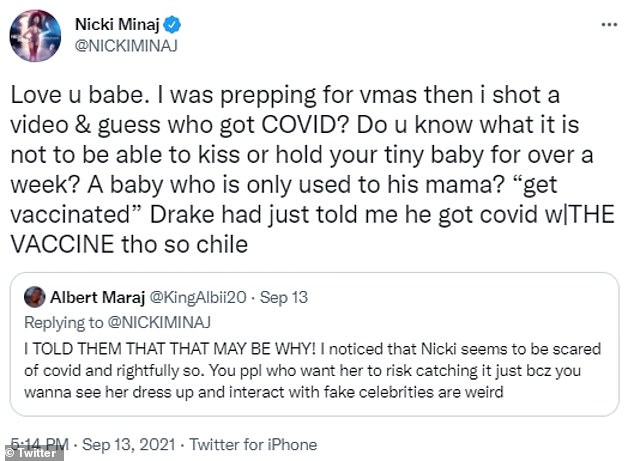 Minaj has faced huge backlash for her tweets; from celebrities, doctors, and even world leaders.

She was aggressively responding to her critics on Twitter until shortly before she claimed her account had been suspended.

Dr Anthony Fauci responded to Nicki Minaj’s vaccine concerns, saying there’s ‘no evidence that it happens, nor is there any mechanistic reason to imagine that it would happen.’

‘There is a lot of misinformation, mostly on social media. And the only way to counter mis- and disinformation is to provide a lot of correct information and essentially debunk these kinds kinds of claims,’ Fauci told CNN on Tuesday when asked whether the vaccines could impact reproductive health. ‘

Fauci said that Minaj’s controversial post ‘may be innocent on her part.’

‘I’m not blaming her for anything, but she should be thinking twice about propagating information that really has no basis, except for a one-off anecdote. That’s not what science is about,’ Fauci said.

The CDC has said: ‘There is no evidence that vaccines, including COVID-19 vaccines, cause male fertility problems.’

Minaj has not backed down from her controversial tweets, and insists that she does not discourage anyone from getting vaccinated, saying she wants to do her own ‘research’ and is opposed to forcing vaccines on those who don’t want them.’

Even British Prime Minister Boris Johnson weighed in, condemning Minaj’s comments and telling reporters he would rather listen to NHS England’s top GP Nikki Kanani about the ‘wonderful’ vaccine than the rapper. 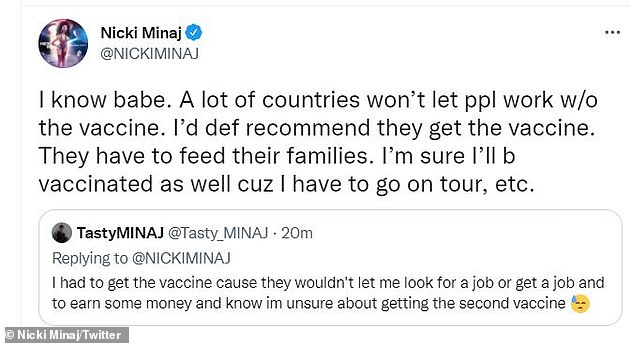 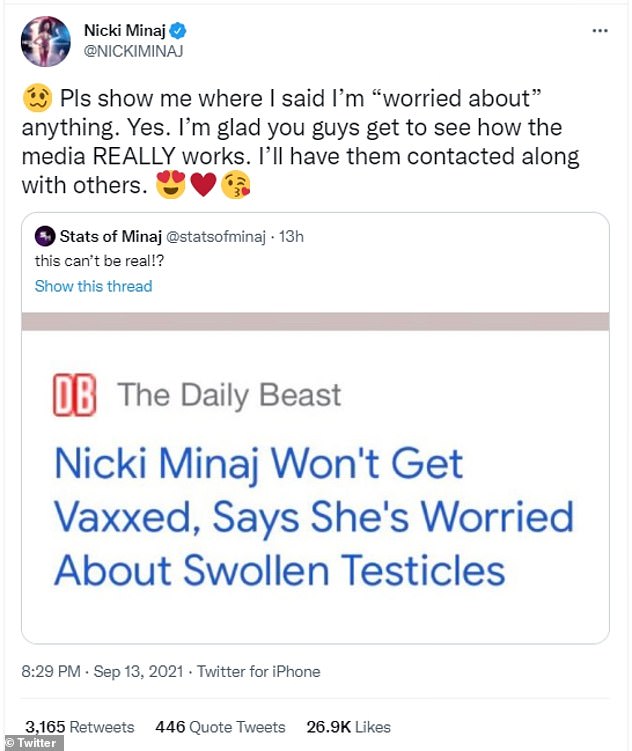 achristi4 September 16, 2021
Hop Into Spring With Our Beauty Tips, Products and Trends For Spring 2021 Issue