The Hofsas House Hotel has announced its new Artist-in-Residence program, offering art tours, and has several murals and public displays of art. The first Artist in Residence is Marie-Clare Treseder Gorham, a Carmel-based folk artist who incorporates medieval themes and iconography in her work that reflects the style of the California Arts and Crafts movement. Her great-grandfather was William S. Rice, one of the masters of the movement.

She will make the first of monthly appearances from 4-6 p.m. on Dec. 11 and 4-6 p.m. on Jan. 8. During the appearances, she will showcase her first Artist-in-Residence project of creating a custom headboard and room décor for Room 36, which is a deluxe king room with a fireplace, private balcony, and ocean view on the street level of San Carlos Street, the same floor as the hotel’s lobby. She will also paint a few characters on the entrance door that will highlight the unique nature of the room.

The complimentary art-themed reception for hotel guests will include meeting the artist, a sneak peek at the current project in which people can watch and ask questions of the artist, plus wine and small bites. The inspiration for the Artist-in-Residence program began early in the COVID-19 pandemic. The City of Carmel-by-the-Sea created a campaign to promote solidarity in the village. To honor the town’s heritage as an arts colony, Gorham painted an outdoor mural called “Carmel Shell” which is located on the corner of Mission Street and Sixth Avenue.

Visitors shared selfies on social media, and Visit Carmel and the local library distributed coloring pages of the mural’s design, with versions hanging in windows for neighbors to see. The campaign fits nicely with a 100-year tradition of artists drawing inspiration from this storybook village. No local business fits as well within that storybook as Hofsas House, a uniquely decorated boutique inn owned by a woman and once brought to life by a woman who became one of America’s finest artists. Located in a quieter part of downtown on San Carlos Street north of Ocean Avenue, the Hofsas House borrows from the fabled Dutch/Bavarian architecture of the 19th century. It just needed a spectacular adornment.

Enter Maxine Albro (1893-1966), who left a remarkable visual stamp on the village with her work on the hotel. Among few women commissioned under the New Deal’s Federal Art Project during the Great Depression, Albro became best known for painting a large fresco at San Francisco’s Coit Tower, depicting agricultural life in California.

Influenced by the work of Mexican muralist Diego Rivera, Albro moved to Carmel in the 1940s, befriending innkeeper Donna Hofsas, who opened her hotel in 1947. To enhance the inn’s Bavarian theme, Hofsas commissioned her friend to adorn the building with a whimsical mural. In addition, Albro painted three works now hanging in the lobby, along with the colorful, elaborate headboard in Room 47. (Guests often request that room as part of the “Get Artsy Package.”)

Today, Hofsas House retains its charm, with help from its pronounced pink exterior and Albro’s mural. Managed by Hofsas’ granddaughter Carrie Theis, the inn cherishes Albro’s work as a familial legacy. “We appreciate the work by Maxine to bring more character to Hofsas House,” Theis said. “She adds to the artistic history of Carmel.” 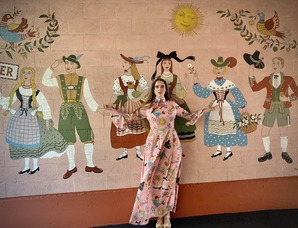 Tracey Emin / Edvard Munch: The Loneliness of the Soul

ART: Interview with Brigette Jones about art in graphic design

Mira Wanderlust May 15, 2021
pop over to this web-site Hop Into Spring With Our Beauty Tips, Products and Trends For Spring 2021 Issue